History of the International Society for Hepatic Sinusoidal Research

Once upon a time, in the low countries at the North Sea, a few young researchers came together to discuss their business. As starters in a biomedical career, they earned their modest living by investigating different aspects of liver function in an attempt to collect enough results to write a Ph.D. thesis to be defended at the old University of Leiden. This happened in the second half of the 60’s, a time full of growth and new opportunities. We were those young investigators, who felt the need to communicate, to cooperate, and to share our expertise and equipment for the benefit of scientific projects. In those days, biochemistry and electron microscopy were strong disciplines and many discussions concerned the meaning of e.g. enzyme characteristics and EM pictures.

Since parenchymal liver cells were already long known, in contrast to sinusoidal cells, we were much more interested in this mysterious population of other liver cells, which were sometimes simply called non-parenchymal cells. We had long discussions about the characterization of these cells in situ and in vitro. Some of us attempted to isolate, purify, and culture these cells (1970). In situ EM studies made clear that we had to deal with several distinct populations of sinusoidal cells, such as endothelial cells (1970), Kupffer cells (1972), and fat-storing cells (stellate cells), to which a population of pit cells was added later (1976). The distinction between the sinusoidal cells within the liver, or isolated from the liver, and cells derived from the blood made their origin and differences sometimes questionable, line in the case of monocytes and Kupffer cells.

In an early stage, the discussions on the characteristics of sinusoidal cells seemed just purely academic and was mainly limited to a few research groups in Leiden and Rijswijk. Fortunately, the word spread and colleagues from other Dutch universities and also from other disciplines became interested to join the discussions. Soon an interuniversity working group on liver research was started. The formation of a naional working group within the framework of FUNGO, the organization for funding medical research projects at that time, was the next step. Soon we were the biggest group in this organization in terms of total number of projects and grant support. Due to the participation from different disciplines, particularly clinicians, the initiative to establish the clinically-oriented Dutch Society for Hepatology was taken. All this occured in the first half of the 70’s.

Organizing meetings and scientific communications, along with spending money on projects and performing research were all very exciting and inspiring for the participating people. Amidst all these activities, the authors realized that the sinusoidal discussions in the Netherlands were very inspiring, but at the same time also limited within the boundaries of a beautiful but small country. From the literature and from contacts with colleagues abroad, (see figure H below) we knew that many other people were interested in the study of hepatic sinusoidal cells and as an extension to our ‘national’ activities, we decided to go international. This brought even more excitement, because organizing as an international symposium as young scientists (36 and 39 years old) is not an everyday event. We sent out the message (by air mail– at the time there was no email) and got positive reactions from quite a number of colleagues. At the opening of the first “Kupffer Cell Symposium” in September 1977 in Noordwijkerhout, The Netherlands, we were very proud to welcome Kurt Aterman, Pietro Motta, Tsuneo Fujita, André Blouin, Kyuichi Tanikawa, Hans Popper, Ed Roos, H. Liehr, Pierre Drochmans, Theo Van Berkel, Trond Berg, Hans Glaumann, G. Lazar, Franz Vonnahme, Dariush Fahimi, Nick Di Luzio, Alvin Volkman, Ralph Van Furth, and V. Sljivic amongst many others. Hans Popper also visited the second symposium and gave much appreciated and admired summary lectures at the closing sessions. (see figure F)

The symposium started with a time schedule of arrival on Sunday and a first keynote speaker on Sunday evening. This time schedule was almost completely preserved during the following meetings. Monday was scheduled for a day completely filled with oral and poster presentations, plus an evening session. Tuesday afternoon was for the excursion, Wednesday again a working day with an evening conference dinner, Thursday morning for a final scientific session and closing ceremony at lunchtime, enabling people to return to their homes before the weekend. The venue of the first two meetings in Noordwijkerhout was a former Roman Catholic seminary for the education of priests. The building was difficult to reach (far outside of town ‘in the middle of nowhere’) and provided accomodations, meals, and also important bar facilities. The fact that regular Dutch dinners start at 18 hours caused a cultural shock to most participants from countries known for their more advanced gastronomic status. However, the local situation implicated that nobody could escape from the symposium, all participants lived together in one building for the larger part of a week, and had ample time to discuss matters of common interest. We are sure that many friendships and cooperations started then and there.

During the first symposium, we collected manuscripts and produced the first proceedings published by the North-Holland Publishing Company. For the second symposium, we produced the proceedings through Elsevier Biomedical Press. At that point we understood that in fact we did all the work, i.e. producing the camera-ready manuscripts, whereas the publisher contracted a printer, spread the news, and had the profits. Consequently, we decided to produce the proceeding all by ourselves, and bring the camera-ready manuscript to our own printer. Publishing and distributing the proceedings was done on our own, direct management. This provided some, albeit not much money, for which we established the “Kupffer Cell Foundation”. We could use this money for inviting a few speakers to attend the symposia, or for providing a poster prize or a special “Prize of the Kupffer Cell Foundation”. All in all, we produced ten proceedings with a total of 4,900 printed pages. Up to the present day, the proceedings are quoted and still are a reference to the scientific work in the field of sinusoidal cells for the years 1978 through 2000. As a spin-off, we also published a book “Sinusoids in human liver: health and disease”, edited by Paulette Bioulac-Sage and Charles Balabaud, published in 1988.

Fortunately we obtained the cooperation of the Institute for Scientific Information (ISI) for the announcements of all our publications in Current Contents, section Life Sciences. We also tried to produce the Kupffer Cell Bulletin, (see figure E) as a means of communication and a journal-to-be. The green photocopied bulletin met the need for communication between the symposia, but did not make it as a journal, in spite of the nice reviews that were published.

The first Kupffer Cell Symposium was a success, although the number of participants was not very high, i.e. in the order of 125 people, but this was the first time sinusoidal people from many countries were together. Remarkably, many stayed local to the meetings and participated in many of the following meetings. After the first symposium, it took some time before the organizers of the meeting (the authors of this history paper) had the courage to organize a next meeting. This was because at that time our careers needed more time and attention. Nevertheless, the second Kupffer Cell Symposium took off in 1982, again in Noordwijkerhout, The Netherlands. (see figure G) We followed the same schedule as the first symposium and at the meeting it was decided to organize the meetings every three years. Later in 1988, it was decided to enhance the frequency of the meetings and change the name to the biannual “Internatilnal Symposium on Cells of the Hepatic Sinusoid” to be held alternatively in Europe, USA, and Japan. During the first and second symposiums, we were looking for future organizers of the meetings and were very lucky to find André Kirn (Strasbourg, meeting in Bischenberg), Karl Decker (Freiburg, meeting in Titisee), Bob McCuskey (Tucson), Kenjiro Wake (Tokyo, meeting in Kyoto), Charles Balabaud (Bordeaux), Robin Fraser (Christchurch), Michael Arthur (Southampton), Fernando Vidal-Vanaclocha (Bilbao), Makoto Naito (Niigata), and Bård Smedsrød (Tromsø). They were willing to organize a meeting and also take part in the activities of the scientific committee creating scientific program of the next meeting. (see figures A, I, and K) The “sinusoidal community” owes a great deal to these people who worked very hard to get the meetings going and being successful. Until now, twelve international meetings have been organized. We expect a new future for sinusoidal cell research now that ISHSR has been established– a next, promising generation of new, younger colleagues leads the way into the future…

After the Bordeaux meeting, some members of the Scientific Committee were inaugerated as Commandeur d’Honneur of the Commanderie de Bontemps de Medoc et des Grave on September 5, 1996. The committee members are, from left to right: André Kirn, Kenjiro Wake, Eddie Wisse, Bob McCuskey 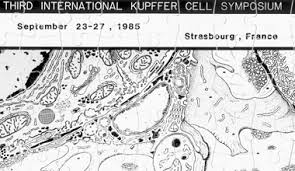 The participants of the 1985 Strabourg meeting were surprised to find a sinusoidal jig saw puzzle together with their conference papers. The picture and puzzle were designed by Jean-Louis Gendrault of the Strasbourg laboratory. 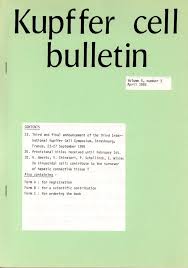 During several years, the Scientific Committee tried to publish a Kupffer Cell Bulletin to provide information and communication between the symposia. The A4 format was used and the pages were printed with a copying machine. All participants of the last meeting received a copy, intending to encourage them to join the next meeting. Several scientific articles were published, together with first and second announcements of the symposia

Makoto Naito and Eddie Wisse in 1976 sitting in front of the scanning electron microscope of the Laboratory for EM in Leiden University, where they were studying endothelial fenestrae and chylomicron filtration in foetal and neonatal rat liver.

Organizing a meeting in the USA is different from Europe, Japan, or elsewhere. Larger scale meetings are organized in hotels or convention centers, specialized in large scale meetings. For the first meeting in Tucson, Arizona, we met in La Paloma which is a big resort hotel in the outskirts of the city.

During the excursion and the following evening, Bob McCuskey attempted to embarass a few colleagues in the Organizing Committee by putting some funny dresses on and letting them dance with the girls. This was probably the most photographed moment of all sinusoidal cell meetings.

Kurt Alterman, pathologist at Halifax Nova Scotia, visited the early meetings regularly and enthusiastically discussed the history of the hepatic sinusoid and the early, i.e., nineteenth century investigators involced in its study.

The 21st International Simposium on Cells of the Hepatic Sinusoid

The role of sinusoidal cells in the hepatobiliary diseases

Preliminary program, call of abstracs and travel award applications will be available in January 2022